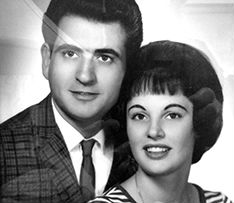 Full of heady hopes and dreams – but with virtually no lira in his pockets – Raffaele J. Colella arrived in the U.S. from the predominately farming township of Sturno, (Campania Region, Avellino Province) Italy in 1958 at the age of 18 years old. Upon arrival, he settled in the State of New Jersey with immediate family members whom crossed the pond some years earlier. Contrary to visions held by many immigrants from the Italian homeland, Ralph quickly observed that the roads were not paved with gold in the U.S.; but rather, were colored with the brow sweat of hardworking entrepreneurs. Without a bit of discouragement, he made the fateful decision to join the self-employed sect and commenced operating a single “cold” catering truck, which roamed daily through several northern New Jersey cities. Learning of the growth opportunities flourishing in the western U.S., Ralph transported his now sizable family of a wife, three child-aged sons. youngest daughter and the family dog, to Phoenix, Arizona in 1973. Here, in his newly-adopted home in the Valley of the Sun, he achieved untethered success; starting with one cold catering truck, which was ultimately followed by another, and then another, and so on. With the industry’s progression into “hot” trucks, Ralph Colella keenly recognized the wave of the industrial catering future and transformed his burgeoning catering business out of the cold truck model and fully into the more equipped hot trucks. Once again, after a period of abounding success operating multiple and increasing numbers of hot trucks, Ralph vertically expanded his business enterprise with the opening of a catering commissary in 1984. Today, he and his now adult-aged nearest and dearest famiglia continue to operate his state-of-the-art food truck and catering commissary and with over 70 food trucks as well as expanding into the now popular gourmet food truck sector in the greater Phoenix, Arizona metropolitan area. Ralph’s hard work and dedication to doing what he loves made his family enterprise the largest food truck operator in Arizona.